On 30 November 2015, high-level representatives of politics, science and civil society met at the Federal Foreign Office to discuss the way towards a “Foreign Policy of Societies”. In his key note speech Helmut K. Anheier focused on the increasing influence of foundations: Which role do they play in relation to the state? What are their strength and weaknesses in the international arena? What lessons can be learned from past involvements?

“We have to move from a foreign policy of states towards the foreign policy of societies.” In a speech on cultural foreign policy, just a few months ago, Foreign Minister Steinmeier built his argument for soft power on this quote by Ralf Dahrendorf. Or, more modest perhaps in its aspirations and in the words of Joseph Nye: we need a foreign policy in which second tier actors play significant and recognized roles.

Note that Dahrendorf spoke of societies not civil society alone, meaning that business corporations and even communities are part of this kind of broader foreign policy. Volkswagen and Google, the Turkish people in Germany, the Irish in London or Algerians in Paris – all are part of a foreign policy of societies.

It is easy to see that such a foreign policy is neither easier nor more harmonious; as concept and in reality, it is likely more complex and also more conflict-prone – but this new approach is first and foremost a necessary policy shift. Countries or states have become more interdependent, economically as well as socially, and in terms of politics and culture. Many countries are no longer as sovereign in the classical sense, and second tier actors, some of which quite powerful and with resources rivalling some states, have entered the arena of international diplomacy.

This includes the rise of foundations, meaning independent, private organisations with their own endowment serving a purpose that is charitable in the law of the country. There have never been more and richer foundations than today. The majority of foundations in this country and the United States, the two largest foundation sectors in the world, were created in the last quarter century. And never were there more foundations that included “international” among their objectives.

A focus of such entities is a good litmus test for Dahrendorf´s foreign policy of societies: foundations are independent actors in a dual sense: they are neither beholden to market expectations nor to the ballot box. They are among the most independent institutions of modern society. As Waldemar Nielsen once put it: they are quasi-aristocratic institutions in the midst of formally egalitarian societies. A sentence that expresses so well the legitimacy tensions inherent in foundations: as private actors they embolden themselves to serve the public interest. They are self-appointed ambassadors of agenda more particularistic than the state´s, and they serve some aspect of the national interest as they define and see it.

Hence, foundations do fit somewhat uneasily into a system of foreign policy because of their very independence. It is their greatest asset, but also their challenge. Unless they violate laws, they can pretty much do as they please. Put differently, foundations have and offer degrees of freedom like few other institutions.

Foundations and the state

Autonomy
Often foundations chart their own course, and engage abroad when official policy neither encourages nor discourages them. For example, the Rockefeller Foundation supported universities in Europe in the interwar years, saving some from serious financial difficulties like the LSE or Heidelberg.

Cooperation
When the interests of state institutions and foundations align, they tend to cooperate. Examples for the collaboration between state agencies and foundations are the reconstruction efforts by the Rockefeller and Carnegie foundations in Europe after WW II; or the Green Revolution in Africa and Asia.

Co-optation
Sometimes state agencies use foundation for their own purpose. One example is the use of private foundations such as Ford by American intelligence agencies to influence international affairs and engage in low-level espionage in postwar Germany. Here too, there was alignment, even though of a covert type, and with a high conflict potential and threats to foundation legitimacy.

Dahrendorf´s foreign policy of societies would have to accommodate indifference and conflict as well as mutual benefit.

Roles of foundations as international actors

What roles do foundations play in such cooperation? Several stand out, looking at the period after the Cold War (1990s) this time:

First responders
Foundations provide resources for new leadership and give momentum for change. They do not need parliamentary authorisation, and often lay the groundwork for other public and private funding sources (e.g. USAID’s Democracy Network project followed and was based on experience of private foundations).

However, there are also challenges or weaknesses that revealed themselves during the 1990s: Insufficiency is one of them. Sometimes foundations simply had not enough resources to accomplish their ambitions. Or, they did not stay on the ground long enough to ensure long-term sustainability of their projects. For example many departed quickly from Eastern Europe and shifted their focus to other regions and issues. Projects suffered at times from amateurism – the foundations’ lack of professional skills and essential experience in the region. Furthermore, programmes were frequently not designed to address longer and more intractable challenges. U.S. foundations were also accused of paternalism and the naïve application of the U.S. model of democracy in other parts of the world. Others criticised the particularism of foundations, who did only focus on some issues rather than others that might have been more pressing in the eyes of outside observers.

For foundations
Foundations should enter partnerships commensurate with resources. They can provide longer term visions and “run marathons”, while democratic states have to stick to four year sprints. In addition, foundations should address their exit strategy early on. They also have to keep in mind that they are second tier actors – not part of the first tier. This means they need to be careful not to influence the politics of states directly.

For states
States must not exploit foundations as they can and will disengage. They need to seek out areas where national interests overlap with foundation goals and should build consultation rather than reporting structures. Furthermore, they must be aware of the legitimacy tensions of foundations.

Foundations and states share a common need. They both rely on better foresight and better coordination. The Global Diplomacy Lab, coordinated by the Foreign Office and supported by a number of foundations (BMW Stiftung Herbert Quandt, the Robert Bosch Stiftung and the Stiftung Mercator) is a good example of this.

So in conclusion: what can we say about the three aspects of a new foreign policy that Minister Steinmeier mentioned in his speech, the foreign policy of societies and the role of foundations?

The last point is also worrying one, and should be a core concern in forums such as the Global Philanthropy Working Group, the European Foundation Centre, and indeed the Foreign Office as well:

Yes, foundations are independent, but they enjoy their independence at the pleasure of the legislatures of the nearly 200 countries and territories of this world. Their freedom and rights are more embedded and their regulations more stringent in some countries than others. The space for foundations has become more restricted over the course of the last 20 years, and in countries such as Russia, and in much of the Middle East, even in some Central European countries, the enabling environment for philanthropy has suffered. If we are thinking about diplomatic partnerships, then, reversing this trend should be among the urgent policy issues to address. 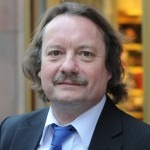 Helmut K. Anheier is President and Dean at the Hertie School of Governance, and holds a chair of sociology at Heidelberg University.