Our topics
Hertie School: The Right to Asylum in the European Union

Four million asylum applications were filed in the European Union between 2013 and 2017. While the incoming flow of refugees has decreased since then, political tensions between EU Member States have continued to increase and intensify, pushing the Union to the verge of disunity. 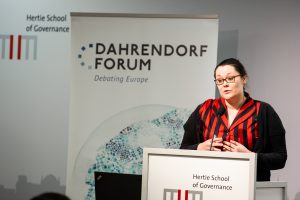 In the context of upcoming European elections, a joint report by Institut Montaigne and Terra Nova calls for overhauling European asylum policy and for a rapid, unified response to the humanitarian emergency in the Mediterranean: “Saving the Right to Asylum”. The introductory talk was given by Marc-Olivier Padis (Head of Studies Department, Terra Nova) and Jean-Paul Tran Thiet (Senior Fellow and Former Board Member, Institut Montaigne) based on this report. Both were outlining possible reforms of the Common European Asylum System. This was followed by commentaries from three discussants, Janna Wessels (University of Giessen), Fanny Thornton (University of Canberra) and Josefin Graef (Hertie School), on the wider political and legal challenges facing the right to asylum in Europe and beyond in the 21st century.

There are currently no forthcoming events, but click here to join our newsletter list to keep up to date.
Show All Events »