Since the “Arab Spring” the Middle East has been undergoing rapid, complex and contentious processes of change. Many observers claim the “Arab Spring” has largely failed. Upheavals have deepened many fault lines, authoritarian forces have successfully reclaimed power, states such as Libya and Syria are considered as ‘failed states’, ISIS continues to expand its power, hundreds of thousands are fleeing from civil wars. Overall, the MENA region seems to be highly unstable. Tunisia, by contrast, stands out shining example. Five years after popular protests toppled the regime of Ben Ali, it has passed a new, progressive constitution and established a national dialogue, recognized also by the international community with the award of the Nobel Peace prize to the National Dialogue Quartet. Tunisia appears as a rare success story in the Middle East.

Yet, Tunisia’s transitional success towards democracy sometimes also overshadows the challenges associated with the new political system and its inability to respond to the economic and social needs of the Tunisian population. Ongoing power struggles between and within the country’s ruling secular and Islamist party seem to prevent substantial reforms that are urgently needed. So where does the young democracy stand today? What has been achieved in the past five years and what are the key challenges ahead? Will the democratic government be able to survive the destabilizing effects of terrorism and the economic upheaval? What could and should Europe do and not do to support Tunisia?

On Thursday, 9 June 2016, the Dahrendorf Forum welcomed His Excellency Mehdi Jomaâ, former Prime Minister of the Republic of Tunisia, for his insights on these questions. After a short introduction to the topic by the Co-Chair of the Dahrendorf Working “Europe and the MENA region,” Claus Offe, Emeritus Professor at the Hertie School, Jomaâ took stock of what has been achieved and what work still needs to be done. Jomaâ hailed, among other things, the adoption of a new, progressive constitution and the establishment of a national dialogue, recognized also by the international community with the award of the Nobel Peace Prize to the National Dialogue Quartet. He called for profound social and economic reforms to realize Tunisia’s “new morning”. Yet, he pointed out that this vision must come from the bottom-up and involve various actors; Jomaâ encouraged young people to get involved in politics and become decision makers. From the European partners, Jomaâ demanded a “European Marshall Plan” to support Tunisia’s transition. Despite social and political challenges, Jomaâ remained optimistic about the future development of Tunisia. Isabelle Werenfels, Head of the Research Division “Middle East and Africa” at the German Institute for International Security Affairs (SWP), commented on the lively presentation by Jomaâ and endorsed the need for structural reforms. She pointed out that Tunisia has indeed achieved a lot over the past five years, such as increasing transparency, but corruption, for instance, remains a big problem. Like Jomaâ, Werenfels also called for more international support and claimed that Europe’s approach lacks a clear focus and coordination. Overall, it was stimulating presentation and discussion. 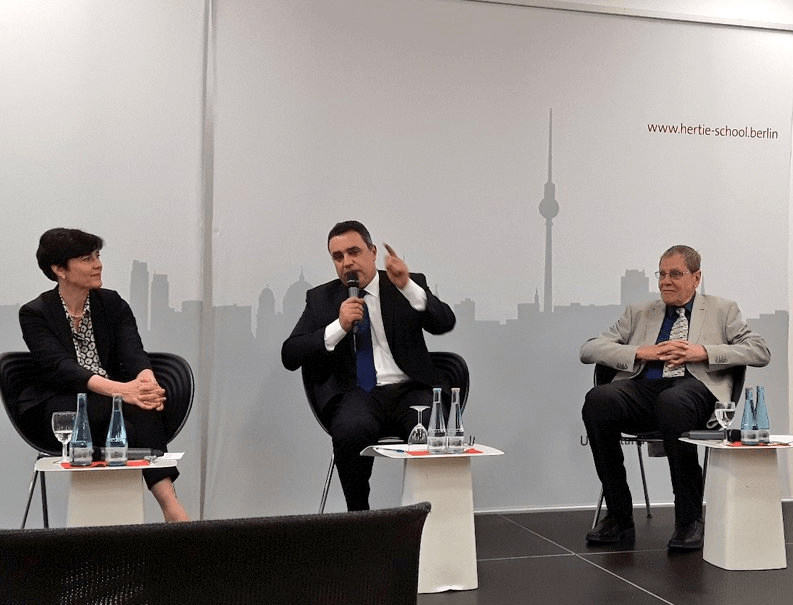 Mehdi Jomaâ served as Tunisia’s Prime Minister from January 2014 – February 2015. Jomaâ was in charge of completing the transition process to organize the country’s first general and fair elections under the new Constitution. During his mandate, Jomaâ restructured the security apparatus and launched the national economic dialogue to create a national consensus around priority fiscal and structural reforms. Mehdi Jomaa is holder of the Tunisian Order of the Republic and German Order of Merit.

There are currently no forthcoming events, but click here to join our newsletter list to keep up to date.
Show All Events »