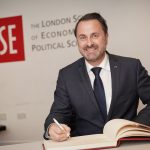 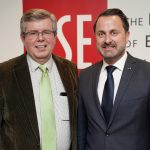 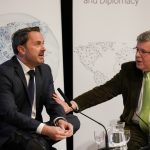 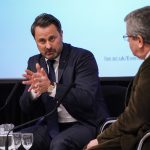 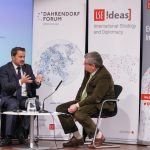 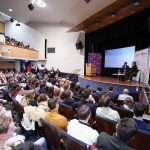 The Dahrendorf Forum at LSE IDEAS once again joined with LSE’s European Institute to host a discussion with Xavier Bettel, Prime Minister of Luxembourg, chaired by Kevin Featherstone (Eleftherios Venizelos Professor in Contemporary Greek Studies and Professor in European Politics and the Director of the Hellenic Observatory).

In a relaxed and frank conversation with Prof Featherstone,  the Prime Minister shared his thoughts on the current state of the EU and its future, as well as fielding the inevitable questions about Brexit and Boris Johnson.

Reflecting on the recent growth of euro-scepticism, instability in the wider international system displays and the general shift away from multilateralism,  Mr Bettel discussed how to strengthen the European Union, internally and towards the wider world.

Following the legislative elections of 20 October 2013, Xavier Bettel was appointed Prime Minister, Minister of State, Minister for Communications and Media and Minister for Religious Affairs on 4 December 2013 in a coalition government formed of the Democratic Party (DP), the Luxembourg Socialist Workers’ Party (LSAP) and the Green Party (“déi gréng”).  After being re-elected in October 2018, Bettel is currently serving in his second term as Prime Minister in a coalition government formed by the Democratic Party, the Luxembourg Socialist Workers’ Party and the Green Party.

A member of the DP since 1989, Xavier Bettel was elected to Parliament for the first time in 1999, at the age of 26. He was since reelected in 2004, 2009, 2013 and 2018. At local level, Xavier Bettel was as municipal councilor (2000-2005) and later alderman (2005-2011) for the City of Luxembourg. As of 2011, he assumed the role of mayor – an office he held until his appointment as Prime Minister in December 2013. Xavier Bettel holds a master’s degree in public and European law and a post-graduate diploma of advanced studies in political sciences and public law from the University of Nancy.

LSE IDEAS (@lseideas) is LSE’s foreign policy think tank, connecting academic knowledge of diplomacy and strategy with the people who use it.

The LSE European Institute (@LSEEI) is a centre for research and graduate teaching on the processes of integration and fragmentation within Europe. In the most recent national Research Excellence Framework (REF 2014) the Institute was ranked first for research in its sector.

The Dahrendorf Forum is a major research and policy-engagement network that brings together academics and practitioners to critically engage with the challenges facing Europe. The current research cycle interrogates relationships between EU and non-EU countries, the implications of Brexit, the migration crisis and populist movements.
We use cookies to ensure that we give you the best experience on our website. If you continue to use this site we will assume that you are happy with it.OkLearn more