The Dahrendorf Forum recently circulated a survey among Dahrendorf working group members and experts, asking them to weigh in on the potential outcomes of Brexit. Below is a summary of the results and comments from Dahrendorf Postdoctoral Fellow, Tim Oliver. 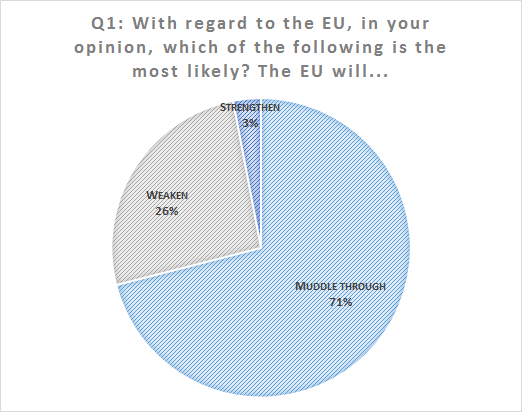 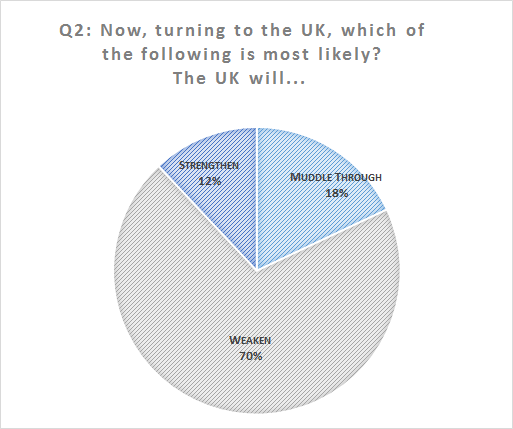 That the majority of respondents believe the EU will muddle through is a sign that many think the EU cannot solve the problems Brexit presents any more than it can the other big questions it faces in the Eurozone, Schengen, or in relations with Russia or Turkey, all of which it has muddled through in the face of. But for how long can the EU kick the can down the road? Brexit is a process, not an event, and could become an irritant for years to come. We should not overlook the potential for Brexit, along with other issues such as the current problems surrounding Italy and the Eurozone, to wear down what is left of European unity and solidarity to the point where the Union stagnates. Muddling through is a way of coping with but not solving the problems the EU faces.

That Britain is perceived to have been weakened by the vote to leave does not come as a surprise. The political and economic turmoil that followed the vote, one that left the UK a divided country in more ways than one with a constitutional settlement in flux, sent a powerful message to Europe and the world. A narrative of Britain as weak, divided and dysfunctional has caught on thanks to media coverage, online debate, academic analysis, business reaction, responses by world leaders and an expectation that Brexit would be bad for the UK thanks to the wide-spread scepticism before the vote that a vote to leave would be good for the UK. Shifting this narrative will not be easy, even if the UK succeeds in managing the problems Brexit has caused. For the new Prime Minister, Theresa May, the immediate priority will be the unity of the UK, something she has already pushed hard on in speeches that have emphasised social matters and in moves to ensure the UK remains united. This will not be an easy task, but feelings elsewhere that the UK is going to fragment should not trigger feelings of schadenfreude elsewhere in Europe because the costs from a UK break-up or a more inward looking country would be felt by the rest of Europe.
The opinions expressed in this blog contribution are entirely those of the author and do not represent the positions of the Dahrendorf Forum or its hosts Hertie School and London School of Economics or its funder Stiftung Mercator.
Back to home